And now it gets awkward…

Be advised: The title of this post isn’t a joke.

Last week my wife and I had an amusingly awkward incident at a department store. Only afterward did we realize that what we thought was funny might, y’know, get some folks killed.

It began simply enough. We wanted an item from the “family planning” cabinet in the pharmacy. For those who don’t know, “family planning” is the department store euphemism for “sex stuff.” (Don’t worry--I won't tell you what we bought. Let’s keep some professional distance, shall we?) You can’t get items from the family planning cabinet yourself; a pharmacy employee has to unlock it and retrieve The Item (that's capitalized now) for you. My wife was elsewhere, doing some other shopping, so it fell to me to make the request.

Now, I don’t get embarrassed about stuff like this. Back in high school, a number of my friends relied on me to purchase their condoms for them. They would drive me to the store, hand me money, and await my return, usually throwing me a few bucks for my trouble. The guys were embarrassed to buy them; I wasn’t. It was the ‘80s and AIDS was a gods-damned nightmare made real. I didn’t want to see anyone get sick and die. So despite the fact that I was having zero sex, I bought a lot of condoms in an era in which people still sniggered at that sort of thing. Teenage Mike didn’t care, so you’ve probably surmised that Adult Mike gives precisely zero fucks about what some store clerk might think of him purchasing an item from the family planning cabinet. But I digress.

To obtain The Item, I had to tell this young woman (who was clearly far more embarrassed than I was) exactly which item I wanted. Take note of this. It’s important.

She fetched The Item from the locked cabinet and asked if I’d be paying for it in the pharmacy or at checkout. My wife and I had quite a lot of shopping to do yet, so the clerk put The Item in a locking security box with a built-in alarm. This would allow us to finish our shopping with The Item in the cart; the cashier would unlock it for us upon checkout, we were told. We continued shopping.

The checkout process was unremarkable until it came time to get The Item out of its plastic prison. “I can ring it up,” the clerk said, “but they’ll have to unlock the case at the door on your way out.” Again, take note.

We did in fact have to wait to free The Item from its Shame ContainerTM until we were on our way out. The elderly fellow at the door fumbled with the lock for some time before he was able to open the Vault of SinTM, ensuring a line backed up behind us...and that everyone in said line could totally. See. Why.

So to sum up, my wife and I needed an item from the family planning cabinet. The ensuing process required us to share our personal bidnezz with three store employees and however many people were in line at that exit. My wife and I didn’t care; we thought it was funny, because every person we talked to during this routine was so embarrassed they could barely look at us, and that shit’s hilarious. (Also, we’re all human beings. Sex is a thing. Get over it, people.)

But on our way across the parking lot, I thought back to the guys I used to buy condoms for in high school, and I stopped laughing.

All the fellas had to do was buy condoms directly from the pharmacist. No rigamarole, no hoops to jump through, no Box of Moral TurpitudeTM, no fumble-fingered old men delaying their exit--yet despite that relative simplicity and confidentiality, they were embarrassed enough that they needed me to make the purchase, because most teenagers are embarrassed by that kind of thing. Teenagers can also be ultra-secretive about their burgeoning sex lives (gods, America is a cesspool of repression), which further complicates matters and makes them far more likely to simply not buy things like this if someone might see them. Kids were wary of buying this stuff when I was a teenager; now, decades later, because that fucking cabinet is locked and someone has to see, those embarrassed teens might avoid the family planning cabinet and the things inside. Things they might need. Things that might keep them alive.

Yeah, the ‘80s ended, but AIDS didn’t. Neither did any other venereal diseases. Neither did unwanted pregnancy.

We should be stripping away any and all barriers to obtaining things like condoms, not locking them up and establishing an elaborate public shaming system--er, I mean, anti-theft system with the consequence of making it less likely some kids will practice safe sex. Teenagers are idiots and are made entirely of hormones. They’re going to fuck like rabid weasels at every possible opportunity. And as long as things like the family planning cabinet exist, some of them are going to do it without any safety net...just so a corporation can save a few bucks on stolen condoms while appeasing the moral crusaders who like that shit locked down.

I don’t think the family planning cabinet is all that funny anymore.
Posted by C Michael Hall at 10:57 PM No comments:

I suppose I should begin by introducing myself to those of you who've stumbled across this page by accident--which, given the fact that I am spectacularly not-famous, is going to be 99.999% of you. So...

Look around the site; you'll get a decent sense of what I do. I make games and comics (but the business side of things left a sour taste in my mouth). I'm also a musician, a cinephile, a foodie, a collector of toys and other pop culture junk, an avid gamer (tabletop gamer, thanks very much), and a radical leftist. I’m a lifelong sci-fi nerd and monster kid. I'm married (to a woman), have an adult daughter who used to be my son, and I suffer from some fascinating sleep disorders and a fun-filled case of major depressive disorder. I have a lifelong passion for combat sports. I’m also a recovering academic (if you’ve worked in academia, you smiled at that).  If those things interest you, you might enjoy this blog. Sometimes.

If those things don't interest you--or if they upset you, which would be idiotic, but whatever--then dude...keep clicking until you find something else to read. You won't enjoy this, and I have literally zero interest in hearing your contrary opinions. I really don't care. At all. Wanna voice a contrary opinion? Get your own fucking blog.

And now you know who/what you're in for.

This blog is not going to have an overarching theme. It will not have a schedule. It will be about whatever I need it to be about in the moment I sit down to write, and it will come out whenever I need it to come out. Sometimes it will be polished and professional; others, I might not bother to edit the thing at all. I'm not going to turn this blog into just another task in my workload. This blog exists because I'm sick to death of the dumpster fire that social media has become, and because I miss writing things for no other purpose than to write them.

Will you like my little corner of Teh Interwebs? I have no idea. I also don't care. This is for me.

All right, we’ve done the intro thing. Next time: an actual topic. In the meantime, since this post could use a bit of flair, here are some pictures of some Japanese model kits I recently built, then photographed with other toys. (Yes, that's about the level of maturity you can expect around here.) 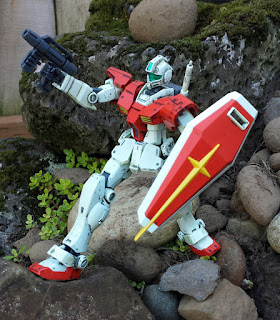 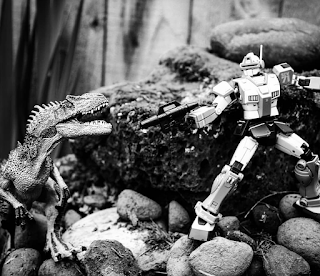 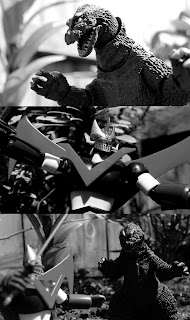 I've never really used this space as a proper blog. Well, there's no "really" to it--I just haven't done it. At all.

That will be changing very soon.

I find that I have less and less interest in social media. It encourages a form of throwaway "discourse" (and I use that word grudgingly) about which I honestly can't be bothered to give a rat's ass these days. Yet, like most creatives, I feel this burning desire to communicate. I'm not even sure with whom--I just feel compelled.

So here we are.