Where have I been, you ask? Well, I've been working on this... 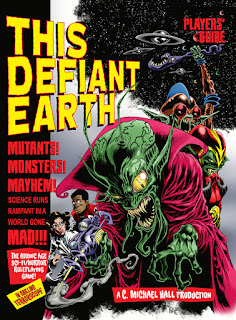 THIS DEFIANT EARTH is a true labor of love. I've been working on some version of this game for, well, years. And here it is, at long last.

THIS DEFIANT EARTH is a rules-lite roleplaying game set in a universe inspired by the popular imagination of the 1950s: an Atomic Age dreamscape as envisioned by television, cheap paperback novels, comic books, and above all, movies. In this world, the American Dream is alive and well, but threatened by monsters from the deep recesses of the Earth, alien flying saucers, and sinister foreign agents pledged to destabilize the American way of life with super-advanced technology. Players take on the roles of America’s noble defenders in these thrilling but dangerous times! It’s up to you to stop the horde of gargantuan ants before they establish a colony in the heart of New York City. It’s up to you to thwart the sinister plans of Kro-Gar, the conqueror from space. You will test-pilot rockets, fight monsters, challenge unknown landscapes, and make the world safe for freedom and democracy. You will stand a champion of THIS DEFIANT EARTH!

Sound fun? Of course it does! And just look at that terrific cover by comic book artist Kyle Hotz (you may know him from his recent Batman/Spectre arc in Detective Comics)! Here's the link to purchase the PDF. What are you waiting for? Those flying saucers aren't going to defeat themselves.
Posted by C Michael Hall at 3:16 AM No comments: