I remember my childhood as an idyllic series of long summer walks with my grandmother, my tiny hand in hers as we wound our way through the forested hillside—

Oh, hello! I didn’t see you there. I was about to go all Pretentious Food Blogger on you and ramble at length about some precious memory or the other: a heartwarming recollection processed through a gauzy pastel filter…a life-affirming musing on the nature of the human experience that would somehow give context and greater meaning to the recipe I’m about to share. Doesn’t that sound just delightful?

No it fucking doesn’t, because nobody wants to fucking read that. Dear Pretentious Food Bloggers: Either get to the damned recipe or go take a flying fuck at a rolling doughnut.*

(I’ve wanted to say that for ages. And having done so, it feels good.)

Anyway, last time I said I would talk about food in my next post, so here's the chicken tikka masala recipe I've been promising to share for eons, but haven’t. This isn’t the first chicken tikka masala recipe I’ve made over the years, but it’s by far the best—and I do mean by far. It’s not an original recipe. It’s just a recreation of classic food truck Indian fare with a few tweaks of my own. But it’s tasty and easy to make. It also freezes really well, so feel free to double and even triple the quantities to make up a massive batch. 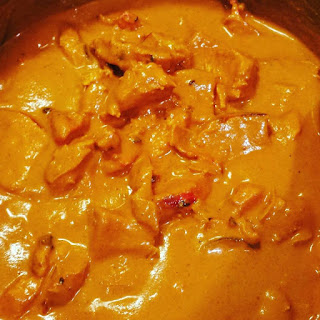 2 tbsp. ghee (The godless savages among you are free to use ordinary butter.)
1 small onion, diced fine
4 cloves of garlic, minced
1 tbsp. ground cumin
1 tsp. salt (I barely use salt when I cook; I prefer to cook with just enough salt to activate certain flavors, then let people salt to taste at the table. That said, I have never seen anyone add salt to this dish after cooking. It really doesn’t need any more than this.)
1 tsp. ground black pepper
1 ½ tsp. ground ginger
2 tsp. ground cayenne pepper (If you can’t get your hands on Indian red chili powder.)
½ tsp. ground cinnamon
¼ tsp. ground turmeric
½ tsp. methi powder (If you don’t know what this is, this is most likely the magic ingredient your Indian recipes have been missing. Get thee to Amazon.)
15 ozs. tomato sauce (For most brands, that’s one can.)
1 cup heavy whipping cream
2 tsp. smoked paprika (Yes, go with the smoked variety.)
½ tbsp. white sugar
1 tbsp. curry powder
1 tsp. lemon juice
1 cup of plain Greek yogurt (Plain, damn it…plain!)
4 large boneless, skinless chicken breasts

The only real trick to this recipe is the timing of things. This is my process; you can probably modify this as best fits your workflow, with only a couple exceptions noted in the text.

1.     Mix the yogurt, curry powder, and lemon juice in a large bowl. (If you want that fun tandoori color, you can add a few drops of red food coloring. That’s actually how most restaurants do it these days.) Add the chicken breasts and make sure they’re completely submerged in the marinade. Cover and refrigerate for at least 2 hours. If you want to do it right, let the chicken marinate for 24 hours; it will be incredibly tender as a result.
2.     Rinse the marinade off the chicken (trust me on this; the lemon juice is key to the marinating process, but you don’t want that lemon flavor lingering). Then broil or grill the chicken until you get some nice charred spots on both sides. Don’t worry about cooking the breasts all the way through! Just get the right char and outer texture, and leave the chicken pink in the middle. Cut the chicken into bite-sized pieces and set aside.
3.     Heat the ghee in a large pot, then stir in and cook the onion for about 5 minutes. Once it’s translucent, add the garlic. Don’t overcook the garlic! It needs about 2 minutes, tops.
4.     Add the cumin, salt, pepper, ginger, cayenne, cinnamon, turmeric, and methi powder to the pot. Stir quickly to avoid sticking, and don’t be afraid to splash in a little water to keep the aromatic paste from scorching. Fry the spice mixture for about 2 minutes. Again, don’t overdo it. (Don’t fuck around with the timing or sequence on steps 3 and 4; this specific method gets remarkably uniform results between batches.)
5.     Stir the tomato sauce into the spice mixture, onion, and garlic. Bring to a boil; reduce heat to low and simmer for 10 minutes.
6.     Stir in cream, paprika, and sugar. Simmer for 10-15 minutes. Stir often! You’ve got some flexibility on the timing here. Just stir and simmer until the sauce is the consistency you want. If you take your time, this sauce gets really thick and rich.
7.     Add the chicken to the sauce, bring to a simmer, and cook over a low flame for about 30 minutes. (Simmer, damn it. Do not boil the sauce or it might break. As we all know, a broken sauce is a gods-damned crime against humanity.)
8.     Serve over white basmati rice. I also like to sprinkle on a dash of dried parsley when I’m plating this stuff. It adds an interesting aromatic accent without messing with the flavor, and it looks fancy as hell. You can also top the dish with ground, unsalted cashews to add texture and another dimension of taste. Add a side of naan and you’ve got yourself a meal.

There you have it. If you get fat, it’s not my fault. Enjoy!